Your farming family has suffered hardship during several years of drought and so you are attracted to the possibilities of work in the new factories opening up in the capital city. It means you will be separated from your family but accommodation is provided and your regular wage will help you support your family. 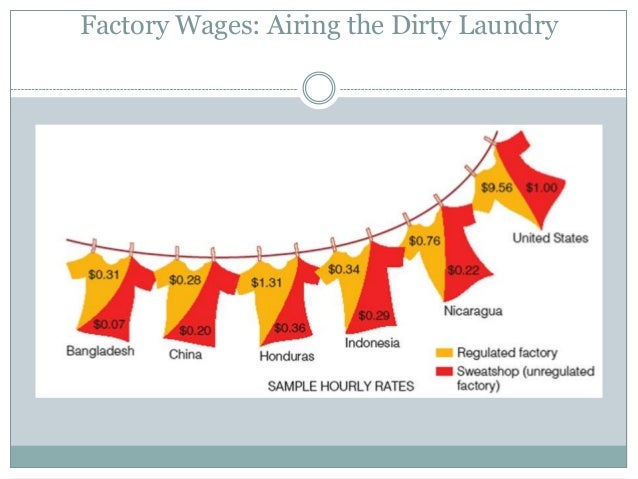 Workers in developing countries have a raw deal. They’re paid minimal wages and are often forced to work long hours in harsh – often dangerous – conditions. Yet, they’re producing some of the world’s most expensive and coveted brands.

Blood, Sweat and T-shirts - This series takes a group of high street fashion victims - with closets full to the brim with cheap, chic brands - and makes them live the life of the Indian factory workers.

Article - What is slow fashion?

Fair Trade USA, a nonprofit organization that certifies that goods made in developing countries meet certain standards related to wages and environmental impact, is several years into an effort to bring its standards to the clothing industry. The effort began quietly, but has recently started to gain momentum.

Nike Sweatshops: Behind the Swoosh

Nike Sweatshops: Behind the Swoosh is the ultimate video for exploring the sweatshop issue. Using Nike as a case study, the film documents first hand the widespread and oppressive and exploitative labor practices in the developing world.

Since 1999, FLA has helped improve the lives of millions of workers around the world by advocating for greater accountability and transparency from companies, manufacturers, factories and others involved in global supply chains.

Are your clothes made in sweatshops?

If you’re wearing anything from Nike, Adidas, Puma, Fila or even some of our well-loved Australian brands like Bonds or Just Jeans, then it’s highly likely your clothes were made in places that most people would describe as sweatshops.

For six months doctoral candidate Hasan Ashraf lived and worked with garment workers in a global garment factory in Dhaka, Bangladesh. He conducted a shop floor ethnography to experience the social lives of the workers. He also documented events of labour resistance on the streets. The film was produced by the Cluster of Excellence "Asia and Europe in a Global Context".

This information is provided by DoSomething.org, one of the largest orgs for young people and social change!

This short film was made to present findings of labour-law violations in the garment industry in Bangladesh and Cambodia. Sweat shops are still evident behind the mask of structured relationship between big clothing giants such as H&M, Nygard, Nike and GAP. Whilst appearing on the surface to adhere to labour laws the garment factories subcontract work to other factories where the laws are ignored and abuse is apparent.