Steampunk - Power up your imagination: Home

Steampunk is often characterized by the setting of the story and inventions that are fantastical and magical. Steampunk uses a lot of visual descriptions, especially when it comes to the machinery and fashion. Oftentimes, a lot of description will go into how a machine works.  Supernatural elements are typically included in a steampunk story. Steampunk plots are adventure-driven stories, where machines play the part of moving the adventure along.  Since there is so much action packed into most steampunk novels, the pacing is usually fast. 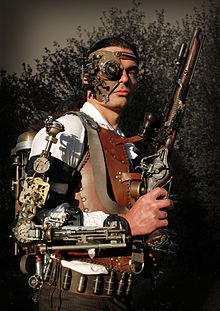